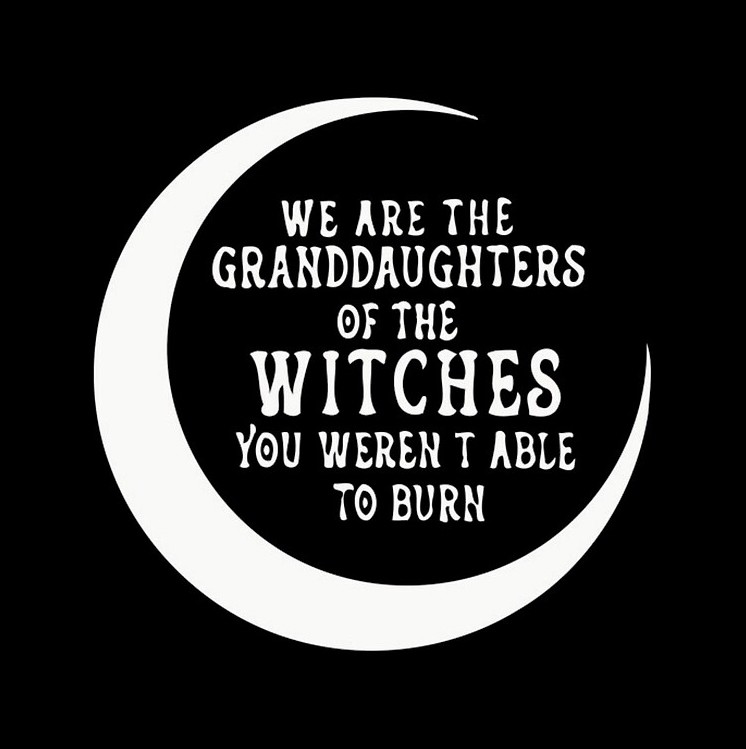 The Resurgence of the Coven

For centuries, witches have evoked a cult hatred, stemmed from a fear of the unknown. People fear what they can’t control, and today, more than ever, the ‘witch’ represents the terror of gender equality. For me, and many others, the witch is the ultimate personification of men’s fear of powerful women and their bodies. Witches and female healers are not endowed with power, or even loaned it. They possess it on their own terms, arguably making them ideal self-defining feminists.

“Because women’s stuff happened behind closed doors, and because midwives and female healers were possessors of this secret knowledge, they were powerful and they were untrustworthy”

Donald Trump has tweeted the term ‘witch-hunt’ over 300 times in reference to himself whenever he feels persecuted. He writes himself into history as a victim. Historically, a ‘Witch-hunt’ stood for the unjust punishment of an innocent party inflicted by the corrupt. We associate witch-hunts now with a community targeting an innocent victim of society, framing them as a violent aggressor – a threat, like the events of Salem. Using this dangerous rhetoric, Trump is ironically incorporating himself into a history of the persecuted – despite being the ‘pussy-grabbing’ misogynist himself.

Kristen J. Sollee lectures at The New School in New York and is also the founder of Slutist, a sex-positive collective founded in 2013 and website that everyone needs in their life.

Slutist seeks to amplify the otherwise marginalised voices of witches, sluts and feminists, while “undressing the intersections between sex and feminism in art, pop culture, politics and the occult”.

In other words, the correlation between Sluts and Witches should never be undermined. Both are feared and discouraged because they express female identity, especially in the modern age.

“I’ve always been into the occult but back then [2013] feminism just didn’t go there. I never related to popular feminist aesthetics or archetypes and wanted to change that. So, over time, Slutist became a platform for folks to share art and opinions in ways that traversed the witch-slut paradigm. Magic and witchcraft is such an intimate part of feminism now, and I’d like to think Slutist contributed just a tiny bit to that shift”.

With the ideology of the Witch, Sollee is exposing the demands of the female liberation movement and, in turn, giving validation back to both incredibly misunderstood groups. Identifying as either shouldn’t bring about shame, a feeling most potently felt in a woman’s most formative years…

Adolescence is an experience where women can feel as though their bodies have become irrevocably possessed beyond return. Puberty becomes an overwhelming horror show and girls are victim to a confusing hormonal rollercoaster ride beyond their control from a young age.

Girls grow up learning too early that the attention their bodies receive from the male gaze comes at a great cost. We’re taught that it’s sexier to wear push up bras so our breasts are on show for other people’s eyes but, that our menstruation will hurt and should be kept secret and behind closed doors. To dumb down our personality by using exclamation marks in emails so as to appear unassertive to those in authority. Reach for the stars but by no means intimidate a man! Seek validation instead!

Growing up, girls learn to plagiarise the inherited opinions of patriarchy; who we aspire to become is something usually spoon-fed and controlled by a previous generation. You learn that breaking the conforming rules of society leads to a deserving punishment; social isolation.

In contrast, a witch’s ethics and decisions are entirely her own and shame doesn’t come into it. Arguably, the witch is therefore a feminist monster of choice, revoking and revising the handed down expectations of being a woman, just as Sollee reclaims the word ‘Slut’.

‘Witch’ is commonly thrown around as an insult, just as the term ‘slut’ is employed as derogatory, tarnishing women who attempt expressions of their own sexuality. In the first-ever Stutist mission statement, Sollee writes that ‘Slut’,

“has yet to recede into the mundane cadre of well-worn disses, and instead grows more prickly and powerful: slut still has bite”.

Sollee’s new book, ‘Witches, Sluts, Feminists’, doesn’t just trace the history of witches. It exposes the rise of female power as well as the persecution and submission of our female past. How do witches resist contemporary and historical repression? How, in 2019, can magic truly be a protest? She explains;

“The popularity of mass hexing against Trump and other fascist, pro-oppression politicians is revealing how much women and folks on the feminine spectrum, in particular, are looking for a political community with a spiritual or magical dimension”.

“If you are a woman and dare to look inside yourself, you’re a witch. You make your own rules….You are a witch by being female and being untamed”.

The occult is still recruiting. On the stroke of midnight in 2017, a large number of America’s witches congregated to perform a mass binding spell on the President following his inauguration. Their hashtag was #magicresistence.

Today, Sollee is carrying on their legacy and, with the rise of the witch in popular culture – series like American Horror Story and old-school reboots like The Chilling Adventures of Sabrina – many others are too.

Regardless of whether you believe in magic, the Coven is arguably a form of magical community building, a way of life that binds together and consolidates feminine authority. In her iconic book, Drawing Down the Moon, Margot Adler expresses her interest in Neo-Paganism by writing that it enabled her to embolden her vision of herself.

Women like Sollee have shown me how these communities stand as a tool of empowerment. Some of the placards at the 2017 Women’s March read: “We are the granddaughters of the witches you were not able to burn” and in one of the first Slutist posts, I notice Sollee writes,

“We’ve come so far and too hard to be dragged back, vilified, or burned at the stake. And so Slutist will tart up the body politic in shameless fashions”

Her craft is at the heart of a feminist power which exists outside of conventional norms but is very much brewing. Have witches turned the language of modern feminism into a kind of spell? Are they using the magic of their rage to influence real-life politics?

“For anyone who thinks magic and spirituality don’t belong in politics, the bottom line is that these gatherings are creating community, solidarity and hope. That’s a radical necessity when you’re fighting, not only for bodily autonomy but in some cases- for your very right to exist”.

Women Behind the Camera