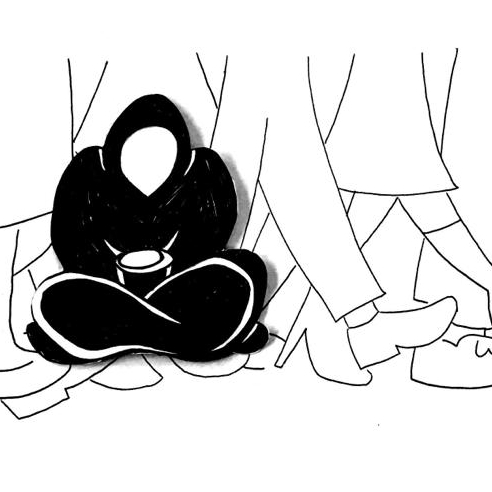 On Sunday, the article Homeless swap the streets for hotel suites during Coronavirus lockdown was published in The Sunday Times. The piece interviewed rough sleepers who have been temporarily housed in hotels in a capital under lockdown.

Frankly, it is remarkable that people who have been ignored for years are being noticed in such a way. The efforts of those who have worked hard to find them space – like Streetlink and St Mungo’s – must not be ignored.

But the journalist has drawn a picture of homelessness in the capital that does not align with the experience of volunteers working to bring food, survival resources, and human connection to individuals sleeping rough on empty streets.

The generalisation is made that “The few people remaining on the streets tend to be more aggressive”.

This is not the case at all. There are not just a few rough sleepers, despite many having been put up. The charity Under One Sky serves 250-350 people every day and they are not the only ones serving.  In fact, due to Covid-19, there seem to now be a lot more first-timers sleeping on the streets.

Yes, there is a lot of desperation – absolutely – but that does not necessarily translate to aggression. For a journalist to make that assumption reduces homeless people to sensationalist stereotypes. It is not fair on them. It does not recognise them as human.

Take the observation, “In a deserted Leicester Square last weekend, one woman with matted hair accosted the few passers-by, none of whom were carrying cash.”

Why “matted hair”? What benefits from this description, other than the stereotype of a homeless “bag-lady”, alienating this woman from people further?

Then, “accosted”, an inflammatory and violent choice of verb to describe a desperate person doing the only thing they can – asking for help.

Homeless women have typically been first on the list to be housed under Covid-19. Why are we not asking how this particular woman is still on the streets, instead of picking upon the hygiene of her hair?

Choice of language in situations like this is extremely important. How you describe someone has the power to reinforce or weaken stereotypes, the kind that can dangerously homogenise communities like the homeless.

When lumped together, personal stories of individuals – which should contribute to building the “bigger picture” – are jeopardised. So, journalists must choose their words carefully.

The beginning of the Sunday Times article documents the positive experience of one rough sleeper put up in a posh hotel. This outcome is brilliant. Both that the individual has been found accommodation and that they are happy there.

But many rough sleepers have immensely complex mental health and addiction issues. Some haven’t been able to adjust and have given up, returning to the streets. The Sunday Times article could have led with a less rags-to-riches “I’ve got a 28in telly now!” storyline, and focussed more on the nuances of such a transition.

Hurdles can pop up anywhere for rough sleepers. Often, hotels are allocated in completely unfeasible locations. There are even stories circulating of intolerant landlords treating rough sleepers at best with hostility, at worst with abuse.

This week, while volunteering, I met two young English guys who are first time rough sleepers. The volunteer with me had been talking to them for weeks. They are 21 and 24 and have no drug or addiction issues. As first-timers, they were offered accommodation relatively quickly, but told they would have to leave London for Manchester by train (paid for).

They were met by a filthy room with dirty sheets. Then, the landlord said they couldn’t leave the hotel. Cooped up and treated with disdain, they returned to the streets of London. I was told that because they technically ‘opted-out’ – they chose to leave themselves – they could be further down the list for housing the next time around. Stories like this might be rare but they are also heartbreaking. These boys deserved better.

On Monday, an article appeared in the Guardian about the efforts of Under One Sky which drew attention to a capital city “seeing a surge of newly unemployed restaurant and pub workers forced to sleep on the streets because they can no longer afford to pay rent.”

Mikkel Juel Iversen, the founder of Under One Sky, is quoted as saying that the charity has “never witnessed a more distressing situation for those sleeping rough in London than the one unfolding right now”.

Their volunteers have conversations with the same people, over and over. They have learnt their names, their ages, their usual orders: who takes four sugars, who is vegetarian, and who will say they want nothing, but eat what you give them anyway. In short, they know their stories.

The Sunday Times is correct – things are desperate. But generalising aggression as a large part of the rough sleeping experience denies personhood and, in turn, agency. Journalists have a responsibility when using language to depict these people’s lives. In the words of Under One Sky, think stories, not labels.

READ MORE ON THIS HERE

News & A Pinch Of Salt