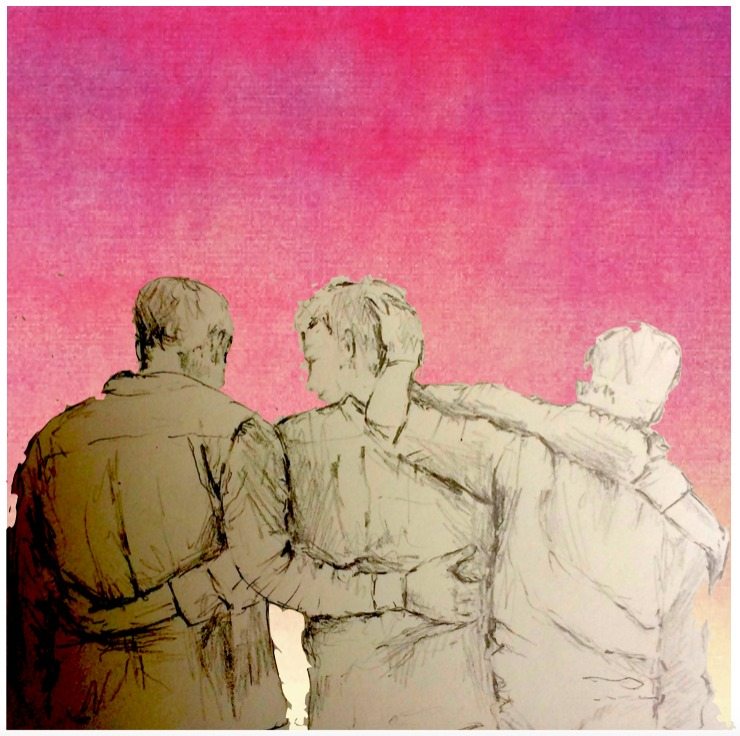 As long as I can remember I have always been a person liable to bouts of anxious thinking, low self-esteem and confidence, but as a child I never thought much of it. I put it down to the “pressures of growing up” or “being a teenager” or (my favourite) “becoming a man”. This was until the devastating effects of mental health truly began to take hold: I lost my Dad when I was 15.

Up to that point I had always been very much aware of mental health conditions due to the effect they’d had on various family members and family friends, but the loss of Dad was an incredibly traumatic watershed for my own appreciation of mental health-related issues. Because of the length of his illness, I was somewhat prepared for the shock and grief to come with loss, but not the unpredictable feelings that followed. I became nervous about everything. Any lump or bump, sore throat, slight weight loss, or difference in my physicality meant a trip to the GP. Any news story about war or adverse weather left me terrified and in need of constant reassurance. I had always been encouraged not to “bottle things up” but this was all too much, especially with the lack of understanding of what was actually “wrong” with me. A few months after Dad dying I was guided into therapy by my Mum. I was correctly diagnosed with severe anxiety, but I was 15 years old, mid-GCSE’s, and due to change schools in less than a year. I was also active outside of school and generally a disorientated teenage boy so my diagnosis and treatment quickly got stuck among a difficult pile of issues I had to deal with. I just wanted these thoughts to go away.

My actual therapy when I was 15 was helpful as I was able to talk through day-to-day thoughts, but I still felt massively lost in terms of what was “wrong” with me. I couldn’t really seperate my current diagnosis from generic personal issues that I’d suffered with through my life like the aforementioned anxious thinking, low confidence and self-esteem.

I proceeded through 3 more periods of therapy with different counsellors  during my GCSEs, A Levels and Degree. All were, once again, extremely helpful but none *really* helped with that one thing – my personal understanding of what I was going through. I hasten to add: rather than the practitioners not doing their job, I was just not in the right headspace for any work to pay dividends. They’d done their best by that stage, be it via CBT (Cognitive Behavioural Therapy) or more conversational therapy techniques, but as the annoying proverb goes “you can lead a horse to water but can’t make it drink”. I couldn’t identify exactly what was wrong with me, and as a result struggled to apply anything that was being spoken about in my therapy sessions to my daily life.

There are several reasons for this. One of the biggest (which I’ve only realised as I’ve grown up) is the lack of normalising these issues with my friends; specifically, my male friends.

Generally speaking, as a boy/man/male/bloke/dude, I have consistently struggled to talk about my mental health issues with other boys/men/males/blokes/dudes. Rather than attack the Male gender as a whole for being completely insensitive to genuine emotional issues, I’d actually say this issue is created by the wider representation of men in society. Essentially a self-fulfilling prophecy of men being unable to talk and therefore creating a society that develops a lot of men who struggle to talk. It’s still widely accepted that “men are worse at talking about their feelings” which is a massive problem when – again generally speaking – growing up, most of your closest friendships are with other men. That leads to a bottling up of emotions when venting is essential for one’s health.

As a teenager I honestly cannot remember one time I openly discussed my mental health with school friends. I would speak about the loss of my Dad only when it was brought up. No one knew I was going through therapy, as far as I was aware. Out of school, I had open ears, but they were generally female. When I moved to my sixth form school I made a concerted effort to openly mention the loss of my Dad to normalise it with new friends, but once again never mentioned anything about therapy or my diagnosis.

Nothing changed at uni until after graduation, when, close friends started actively approaching me to talk about personal issues. This was something I’d rarely experienced before with friends. Talking to others about their concerns created an internal cognitive environment that – despite shining an intense, piercing light on my own issues – cleared the path for genuine, two-way, empathetic conversation. At the same time, one of my best friends from home – who had previously introduced me to entry level mindfulness via yoga and meditation – set up a whatsapp group for close friends (who happened to be male) to actively discuss stuff happening in our lives. This group became a space to discuss everything from ethical conversations that we all found stimulating to the issues that we were going through – like our suffering of anxiety and depression.

Having grown up without a male figure around me to discuss issues with I have felt incredibly privileged to be part of “The Good Guys”. We continue to question how each other are doing and seek advice on therapy, meditation practices, and generally ways to cope with feeling a bit bleurgh. I can say with complete confidence that they have made the decision to go through therapy again a lot easier to both accept personally and discuss publically.

I understand this sounds intense and obviously that scale of intensity of conversation isn’t for everyone in a friendship, but stripping the layers back to the most basic of levels and just questioning how another guy is – on a very real, present level – is the start to a healthy engagement with one’s own feelings. It’s not something that often comes up in conversation by choice, but honestly just asking those simpler questions and genuinely appreciating people’s responses makes a world of difference, especially to a gender not generically known for doing so and an individual who suffers low-key.

Much like a pair of tangled earphones that you’ve got in your pocket.you can shake them about and pull at them to try and use them and hope for the best. Maybe it’ll work, and hopefully you haven’t damaged any of the wiring or accidentally ripped parts of them off. Alternatively you can take a bit of extra time to properly untangle them. Slip the end of the wire through the rest of the maze of wiring and get back to that song or podcast in near enough time. Similarly you can approach treating mental health conditions in multiple ways, but taking steps beyond rashly “bottling it up” and instead talking through your issues with friends you trust – could be exactly what you need.

Working With Men (WWM) is a multi-award winning specialist charity supporting positive male activity, engagement and involvement . It is the first organisation of its kind on such a scale in the UK.  WWM has expertise in the challenges and solutions in working with boys and men who are socially or economically disadvantaged, marginalised or isolated.

My approach to Therapy