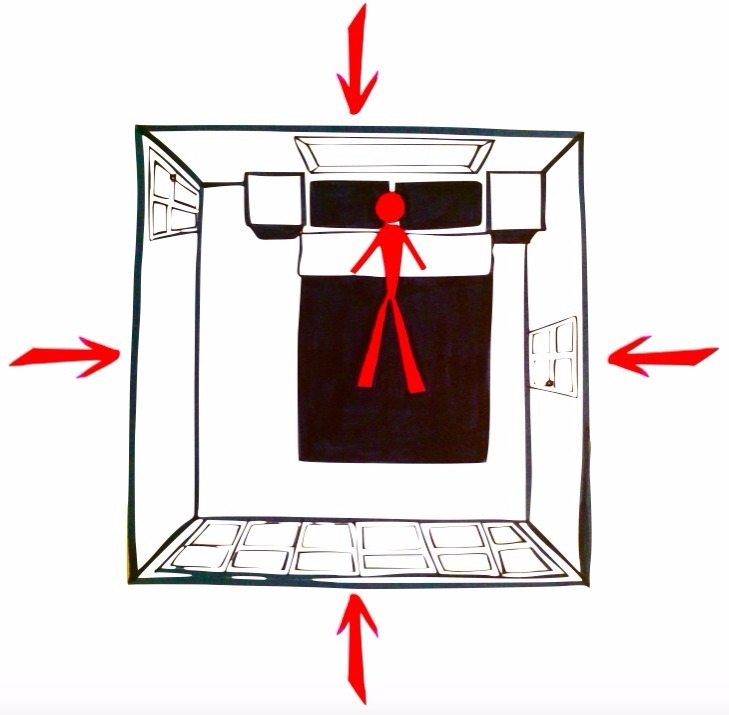 Insane in The Membrane 8

Laughter echoing through the corridor, hurtling down the stairs, crushing me. They’re all there, enjoying their conversation, revelling in each other’s company. I’d love to be there but I’m in the throes of room paralysis. Room paralysis is my own term for when I am either too overwhelmed or anxious to leave my safe space. At home, my safe space is the room I’ve lived in since I was 15. But it is convoluted with mixed emotions. Memories from my teenage years, my lowest points (and some good ones too). They all revolve around this room. My solace when life was overwhelming, a prison when I felt suffocated.

No matter how desperately I crave to leave the four oppressive walls of my room I can’t. These walls comfort and harass me. Choking me. I can’t leave and yet I want to, need to. I try not to pee for as long as possible before it becomes uncomfortable and I have to tiptoe to the bathroom, making my trip as silently as I can, afraid to notify anyone that I am there. Craving alone time, I constantly seek quiet, but when it comes it is overwhelming. If my surroundings are silent, then my mind has less chance to stage an uprising. But if it’s too quiet then my thoughts rage around in my brain, each fighting to be heard.

I’ve noticed a link between a lack of sleep and my room paralysis. It’s not just that I’m exhausted as I am able to function on limited sleep. It’s the lethal combination of feeling low, whilst simultaneously having no energy. Sleep is a cure for many ailments, room paralysis is just not one of them.

A way that I used to deal with being overwhelmed at University, in the throes of room paralysis, would be to hide in my wardrobe. I know, it sounds ridiculous. But the confined space comforted me; the hanging clothes felt like a protection; the darkness, a warm embrace. Sometimes I would stay in there for a few minutes, sometimes for hours: whatever time I needed to come to terms with my flailing emotions. To compose myself. To prepare for the outside world – be it a lecture, party or just my friends.

It was only recently that I discovered that what I had entitled room paralysis, was in fact agoraphobia. It’s a scary word, but there’s a lot of misconception on its definition. As with much of the English language, it’s meaning has morphed to define different parameters. In current jargon, agoraphobia is perceived as an innate fear of the outside world, an anxiety of contact with strangers. Its term is loosely associated with claustrophobia. But in fact, their definitions do not align as much as we think. Agoraphobia can be induced anxiety from situations in which we feel uncomfortable in and an avoidance of such situations in order to not feel trapped, helpless or embarrassed. A known agoraphobic, Edvard Munch’s ‘The Scream’ helps elucidate:

Like phobias in general, there is no rational explanation for this anxiety. I know if I leave my room it’s unlikely that there’ll be a causal reaction. It is irrational, but phobias are more afraid of the feeling of fear, than the feared situation itself. Agoraphobics tend to both be afraid of losing control in certain situations and then being negatively judged as a result of that. The actress Greta Garbo holed herself up in her apartment, shouting ‘I want to be left alone’ as her excuse. Later she would come to say, “I never said, ‘I want to be alone.’ I only said, ‘I want to be left alone.’ There is all the difference.”

In the beginning, I found that when I avoided a situation, immediately I felt better and less anxious. Quickly this escalated into avoiding many situations, just to feel better in that moment. But the connotations reflected badly on me, and would perpetuate the anxiety, creating a pattern of avoidance which was hard to break. We live in a world that’s defined by anxiety and terror; the communal fear of the Islamic State, the weather, climate change, Ebola or whatever the recent toxin is. If agoraphobia were a more common term, then a substantial amount of people that I know would suffer from it. Not confined to their room, but to their screens, the safety of their earphones in public, the seduction of the Internet. But as words morph, as do stereotypes, and whilst the depression stigma is slowly breaking, agoraphobia still has a way to go.

Check out Anxiety UK or No Panic for tips on understanding how to deal with agoraphobia.

Insane in the Membrane 1.2

Insane in the Membrane 5

Insane in the Membrane 1.1
[yuzo_related]