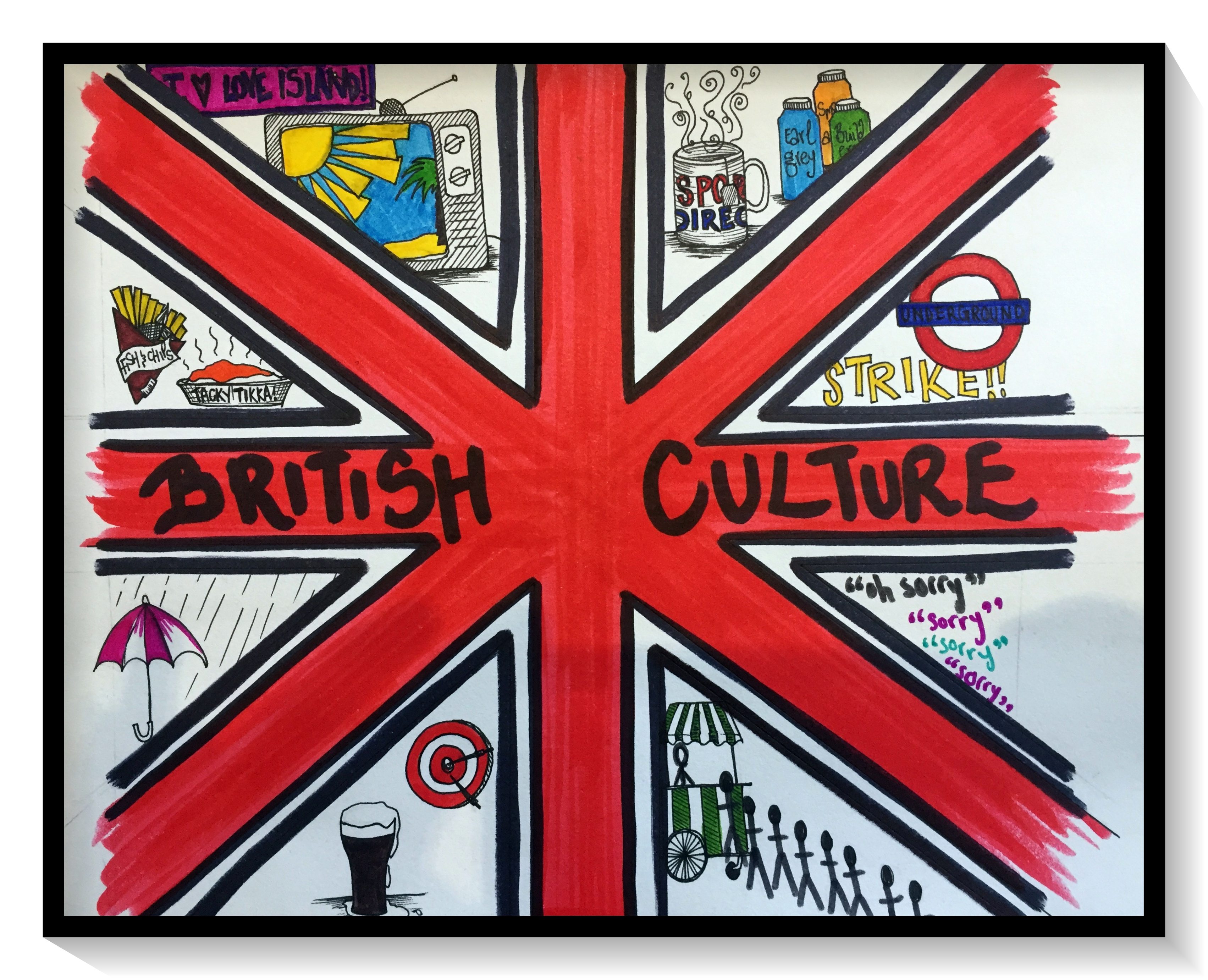 Insane in the Membrane 6

The British are often stereotyped; abroad, we’re drunken, loud and careless, at home we’re snobbish, polite, uptight. But when discussing what makes the British so British, the main characteristics that crop up are the weather, queuing, moaning and, of course, tea. Now, we can’t claim ownership of tea, unfortunately China is owed that privilege, but there are some wonderfully comforting things about British culture: our irrational infatuation with curry, the overuse of the word ‘sorry’, our bizarre, unspoken brilliance at queuing. And the sheer embarrassment we feel when mistakenly make eye contact on the tube, the consistent moaning about the weather, the way almost the entire country latches on to the latest television craze; Love Island, Blue Planet, Downton Abbey, and so on. National identity is at the heart of national patriotism and pride but we don’t always appreciate the negative impact of some British our customs, especially on those suffering with depression.

There’s a large part of British custom that is channelled into not being open about your feelings: a ‘stiff upper lip’ if you will. It invokes a detachment of sorts. If one is not meant to discuss their emotions, their desires, their needs, then how are we to form deep attachments? My closest friends are the ones that know my darkest thoughts, have seen me at my lowest, and yet still love and appreciate me. Being vulnerable is the key to intimacy; in friendships, relationships and all walks of life. And yet there is this bizarre stigma that vulnerability parallels weakness, that being open and honest is a flaw.

In the past, I’ve found it easier to create a social façade; crafting an open, confident, happy mask that I wear when meeting new people. I’ve been told that I smile often and am “always happy”, and it’s exhausting. This façade isn’t all false: I don’t get nervous meeting new people, I like to make people feel at ease, and I do enjoy new company. But, as with everyone, it takes a while to truly know a person. I’ve definitely struggled with shaking off the ‘stiff upper lip’ shackles, and being honest with myself and others. I’ve realised that how close you might eventually be with someone is determined by how vulnerable you are with them. It is hard to allow yourself to be vulnerable, it can open you up to rejection and emotional harm. But that is a risk that is worth taking in pursuit of fulfilling, sustainable human connections.

An interesting discovery I recently found is the lack of adequate synonyms in the English language for ‘vulnerable’. Words like, ‘susceptible’, ‘thin-skinned’, and ‘liable’ are presented as the alternatives, but their descriptions are negative, insinuating a person at risk or who is weak-willed.

Something I feel is also quite representative of British customs is pointless courtesy; etiquette just for the sake of it. The phrase ‘how are you’ is thrown around constantly, without truly desiring an honest response. On the rare occasion when one is given, it tends to be met with incredulity and awkwardness. In our grandparents’ generation, ‘how do you do’ was an accepted social nicety that was met with a similar ‘how do you do’. No expectation of a real answer, and so none was given. It’s strange how little we’ve developed, in terms of societal graces, since the early 20th century. Sincerity can sometimes be rare, perhaps that’s why we all rely on sarcasm so much: either you ask with total detachment or total affectation.

We have a culture of not sharing, which results in people hiding their emotions, forcing them to the pit of their stomach in an attempt to fit the social norm. Choking down how I am feeling has resulted in adverse outcomes. My depression caught up to me very quickly in my second year of University, after four years of emotional repression, and if it wasn’t for a few close friends, my story might have been very different. But since then I have had less frequent bouts of severe unsettledness, and that is in part due to a new-found honesty. The disingenuous questions we so often ask, without expecting a response, create a false sense of authenticity and openness. It forbids us to be vulnerable and honest. It undermines the value of courtesy; we expect it so we don’t appreciate it.

We are slowly beginning to shift our perspective to include mental illness in our everyday dialogue, but there is still a way to go before openness is celebrated beyond just drunken confessions. Given our infatuation with gin and alcohol in general, it’s not surprising that every room becomes a confessional when intoxicated. I’m not saying that anyone should reveal their deepest fears when they first meet someone, but the fear of vulnerability is too prevalent, especially in our typically emotionally restrained culture.

Us Brits will forever moan about the tube strikes, the weather and the sogginess of our chips, grumble about our politicians and Big Brother, but shying around the “awkward” topic of emotion can have serious negative effects on those with depression. Whilst this isn’t inherently British, this ‘stiff upper lip’ syndrome is prevalent in our culture and customs: we neither listen to how people are or tell them how we’re doing. So, let’s continue to celebrate the best things about being British: how no matter what the situation, a warm cup of tea tends to solve all immediate problems, our stubborn perseverance at festivals in the rain, and our sarcastic sense of humour. But let’s forgo the ‘stiff upper lip’.

Insane in the Membrane 1.2

Insane in the Membrane 1.1

Insane In The Membrane 4
[yuzo_related]