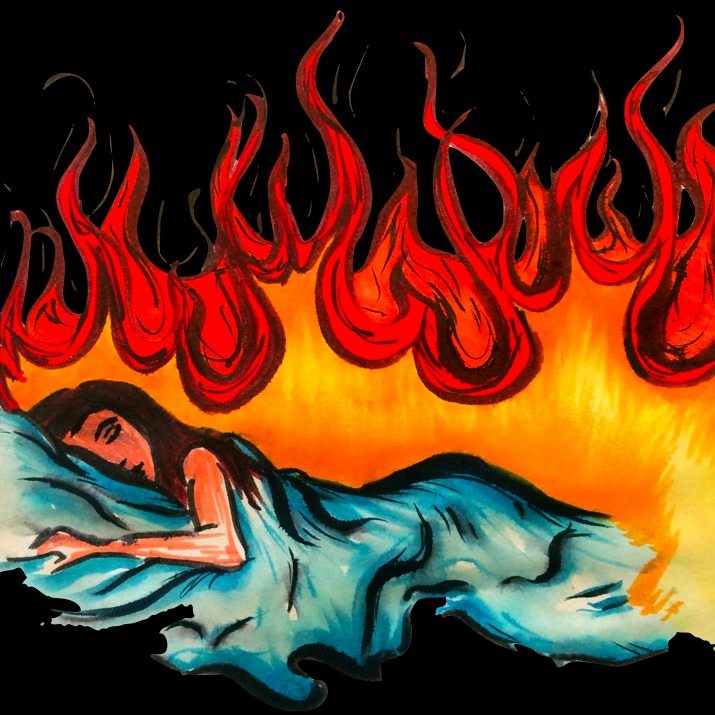 Insane in the Membrane 5

Insomnia: A losing battle with slumber

In honour of World Sleep Day today, here’s me giving my two pence on, as you guessed, my turbulent relationship with sleep.

What is it about sleep that is so comforting? It’s a known healer – of exhaustion, hangovers, come downs, and the like. For those 8-ish hours we’re inactive and our minds can switch off. It’s a time to reflect and, mainly, relax from the long conscious hours we’re just endured. I love to sleep. Drifting off in the backseat, letting my subconscious taking the wheel through an illusory fantasy morphed with soft pillows and warm sheets. In sleep, anything is possible. You could be riding a flying tortoise one minute or dancing the two-step with the cast of Grease and your grandmother in the next. It can vary from magical to the surreal to disturbing and the correlation is not always clear. But sleep and I have never been close companions. Sleep is an evasive beast; and as much as I want us to be, we seem to be non-compatible.

I always thought that insomnia was categorised by a person not being able to sleep at all. But, it covers an umbrella of circumstance: difficulty falling asleep, waking up often during the night and having trouble going back to sleep, waking up too early in the morning, or feeling tired upon waking. My experience with insomnia has manifested itself since I was a child – I first thought it was my sister’s presence that kept me awake until I moved into my own room and quickly realised something else was afoot. A normal night’s sleep now involves between 2-3 hours of restless sleep, difficulty switching off and a bucket load of frustration. I wake up disoriented and often confuse dreams and reality, a disturbing phenomenon.

An easy but temporary solution for insomnia is popping a few sleeping pills, although they come with their own disadvantages. The high addictive rate of pills such as Zopiclone and Zimovane mean they have to be taken with caution and infrequently, so any restful night is impermanent. Insomnia has a way of worming its way into all parts of your life. I’ve embarrassed myself in meetings, by both falling asleep and completely losing my train of thought as a result of taking Zopiclone the night before. This mortifying drowsiness, coupled with the temporary nature of the drug, means I tend to steer well clear of sleeping pills when I can. Anti-depressants, like Citalopram and Sertraline tend to have further repercussions for sleep. I take quite a high dose of Fluoxetine daily; some of the side effects include; insomnia, decreased libido, abnormal dreams and, surprisingly, an increased risk of suicide in under 25-year olds (I am just within that age bracket). For those juggling both depression and insomnia, the anti-depressants on offer are beneficial for their serotonin and consistency but not for the mixture of the two.

Yet, insomnia is not the only sleep-related affliction that curses our troubled sub-conscious minds. Many people suffer from sleeping issues around the world and they can come in many forms; insomnia, sleep paralysis, sleep apnoea, and parasomnia; sleep sex, sleep terrors, and bruxism (teeth grinding), amongst others.

I have suffered with sleep terrors for the majority of my life. Typically associated with children, sleep or night terrors can be completely debilitating to those it affects. Imagine your worst nightmare, re-occurring every single time you close your eyes. I have got to the point where I’ve been afraid to sleep – afraid of what my subconscious will conjure up to plague me this time. Afraid if my imagination will spin a web of lies that lie slightly too close to reality. I still clearly remember my first recurring night terror. I was maybe 7 or 8 and it followed accidentally stumbling upon a particularly disturbing re-enactment of the 1918 shooting of the Russian Tsar’s family. Set in the land of my then-current fixation of Gameboys, it centred on my family, living in a squat wooden house, complete with shrubbery and a stone walkway. What followed was quite similar to the horror that I had so recently watched. A gunman entered the house and, caught by surprise, my mother and two sisters were shot and collapsed. He proceeded to climb the stairs where my brother and father had run to hide. From my concealed spot behind the salmon sofa I heard two gunshots and tightly squeezed my eyes. Nearing footsteps rang closer and closer and nervously I squinted through my lashes to the faces of my dying family and then, a final gunshot. It is commonly said that you can’t die in your dreams, but I vividly remember a burning pang in my chest and then, as if my blood had boiled, a hot trickle of thick blood leaves my body. In short, I was terrified and although that particular nightmare has abated, my nights are still frequented by tales of dread.

I have also recently discovered the phenomenon of ‘Sleep Paralysis’ and found that it affects roughly 7.6% of the UK population. When anyone falls asleep REM occurs; rapid eye movement. It’s basically when your dreams become more vivid and your muscles essentially just turn off. It happens at various intervals throughout your night’s sleep, usually between an hour to 3 hours in total.  Sleep paralysis happens when a person wakes up during that REM sequence and is aware, although unable to move. But despite the research, I still couldn’t quite comprehend how it felt. Talking to someone who experiences sleep paralysis on a regular basis, they explained the sensation: “As I am drifting to sleep, a loud ringing starts in both ears, getting louder extremely fast until it has taken over my whole head, the inside of which vibrates and feels as if it’s going into spasms. It’s as if a spirit the size of your body flies down on top of you, restricting you from moving. Sometimes accompanied by nightmarish images as if you are literally being engulfed by a monster. It is then that I become aware that I am totally paralysed. I try to clench my fists or kick my legs and realise that I can’t. I keep trying and trying with increased frustration until my movement ability comes back gradually over about 5-10 seconds (not suddenly). The whole experience wakes you up, lasting roughly 30 to 40 seconds. I only ever get it when going to sleep, not waking up.” From others, I have heard it feels like the sensation of violently falling. As someone who has experienced quite intense sleep terrors for over ten years, the above sensation couldn’t sound more frightening.

The Nightmare – Henry Fuseli (1781) – is meant to be one of the earliest artistic renditions of the sensation of sleep paralysis.

This has been a difficult piece to end because there’s no one thing that’ll help anyone sleep, but if you’re going through something similar, just know that you are not alone. As debilitating as having insomnia is, talk to your friends about it. Even though they probably can’t offer practical advice, talking could help figure out the root of the problem.

Check out Headspace online or on the app for helpful and easy ways to meditate and relax before bed and throughout the day.

Insane in The Membrane 8

Insane In The Membrane 4

Insane in the Membrane 1.2
[yuzo_related]