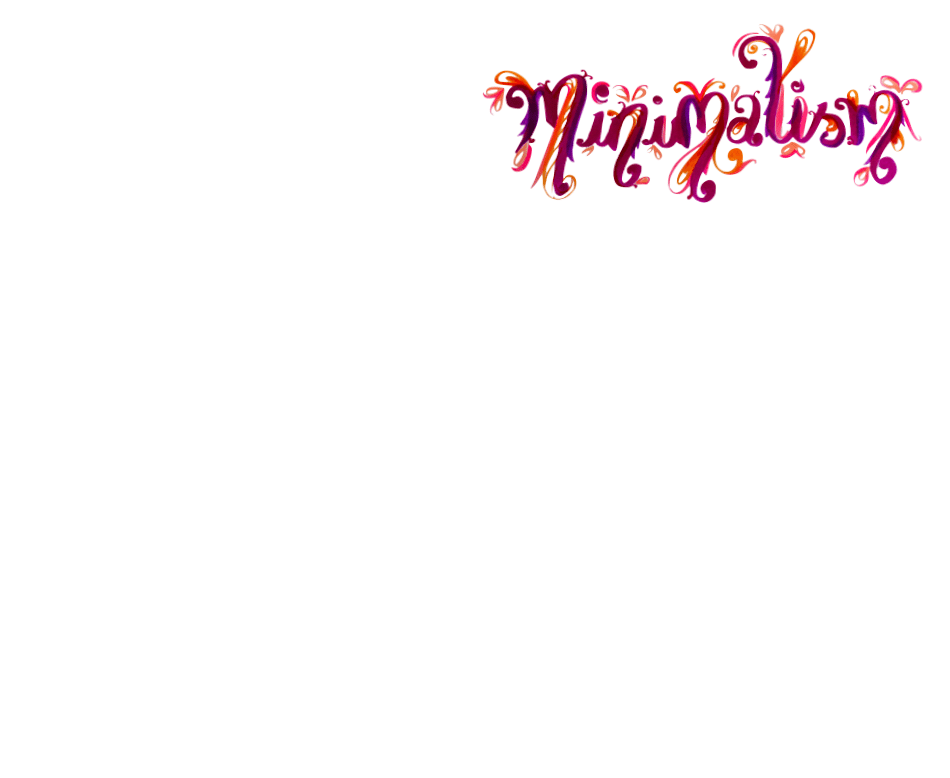 I HAVE TOO MUCH STUFF

I typically create very cluttered spaces and I organise my thoughts in a very cluttered way. That’s manageable when I am only actually doing one thing at a time, but when I am thinking about all of it at once…  it begins to overwhelm.

I have ten thousand, three hundred and twenty-one unread emails.

I have 115 unread texts, 76 unread Whatsapps and Facebook messenger just says 99+. Someone once threw my phone out of the window because of the stress this caused them.

I have 13 paper to-do lists and 7 digital ones.

I have 1,304 friends on Facebook which is about 1,300 more than real people who actually want to talk to me.

I have more collages than I have walls.

This is my room. It looks like my doodles.

Suffice it to say that I am the least minimalist person ever.

Apple, Muji, KonMarie; it certainly seems to be the trending website aesthetic (oops).

Decluttering has been linked to serenity and clarity of thought. And while I largely think it’s boring and oppressive and this minimalist pea on a plate happens to stress me out enormously:

I really do have too much stuff.

And beyond being stressful, it’s gross. I once complained that my room was too small for my stuff. That was an eye-opening moment.

But it’s hard to step back and witness this about yourself when you have been cultivated to consume. The Cambridge Analytica exposé goes to show: people are seen foremost as consumers, not as humans with rights to privacy. We’re bombarded with marketing messages every waking minute (absurd estimations reach 5,000-10,000 per day). To stare at a blank wall is a forgotten joy.

Consumerism is probably the most pervasive indoctrination that any regime has ever solicited. But unlike any other regime, it’s global.

It’s partly nature. Humans are wired to become dissatisfied, that keeps us on our toes. But the media gives an illusion of perfection while social media invites comparison to the imagined perfection of others, and by consequence we are chasing horizons. Nothing will ever be enough.

It’s partly nature, but mostly nurture. Fashion does a good job of making us feel constantly dissatisfied. It really took off around the 18th century, when it started to change almost every year. Hair got big. Cartoonists had fun. Then it got small again. Today, retail has 52 seasons per year. That’s dandy, but there’s also something inherently wrong with it: fast fashion embodies the idea that it’s okay to throw something away, not because it’s no longer usable, but because it has lost social value. That’s an idea this planet can’t afford.

The same goes for upgrades. I am more iPhones behind than iPhones I knew existed. The new one comes out, and your current one – previously your lifeline – suddenly becomes unsatisfactory. Actually, it becomes a source of dissatisfaction, it reminds you of what you don’t have.

The consequence of this consumerist culture is that our attention spans have been pilfered. We no longer listen to songs with Pink Floydian delayed-gratification intros; we don’t even listen to whole records; we listen to radio-cut pop songs with instant catchiness at a prolific turnover rate. We don’t print photographs to frame or store in albums; we collate tens of thousands in digital form, celebrate their immediate ‘likes’, and never, ever look back over them. Even news is blatant sensationalism. One day we kick up a hoo-ha tantrum, then all of a sudden we’re bored of the story even though nothing’s been done to fix it. We’re obsessive consumers and can’t wait for something new and shiny for consume, whether it’s clothes, phones, music or news.

Materialism is not all evil because it fundamentally underpins economic growth. Also, everybody is a bit materialistic. We learned this when they pulled down the Berlin Wall and East Germans invaded West German supermarkets. So rather than demonising consumerism, let’s refine it.

Currently, consumer tastes are driving businesses to degrade workers and the environment (sorry, it’s just the truth). But if we lift the standard of demand, supply will adjust too. That is the nature of capitalism, it evolves and improves. The plastic purge is evidence.

As well as the planet we’re indebted to labourers, so push transparent supply chains as a condition of your purchasing. There is more to exploitation than plain greed, it reflects a distinct pessimism about human nature: the belief that consumers don’t care about workers, and consequently employers can’t afford to. But there is more to us than that.

Expense is an issue: most people assume that ethical products cost more, and that’s only partly a myth. One way around it is the sharing economy, which involves people sharing and recycling goods— download the OLIO app the next time you need furniture and see if anything second-hand is going free in your neighbourhood.

There is, however, the inevitable logic that businesses who pay better wages will sell higher-priced goods.

This is where I vouch for an injection of minimalism. Having fewer things enables you to invest in better quality things, and pay a proper price as matches the labour and environmental costs of production.

Marie Kondo shot to fame with her little book, The Life Changing Magic of Tidying-Up. She is now the world’s most sought after tidying-up consultant (yes that’s a real thing), with an entire industry founded upon her ‘KonMari Method’. Her minimalist, clutter-culling philosophy went from Japan’s Shinto Shrines to New York’ most lavish, upmarket apartments.

In a nutshell, she recommends a one-time ultra spring-clean, carried out in a maximum of 6 months. You basically get rid of / give away anything that doesn’t add ‘joy’ to your life (thanking it before you discard it), and then rearrange everything you’ve kept so that it is immediately visible (and happy). Uncomplicated, un-frivolous storage. This orderliness will allegedly sustain itself (broken-window theory in reverse) and make you contemplate future purchases with due consideration. You will buy less, but you will buy better things. You will be a more valuable consumer to the planet and the species— that’s the part I’m concerned with.

I am right now proposing to my family to put a date in the diary for this purge. Here’s what we’ll do with the surplus: