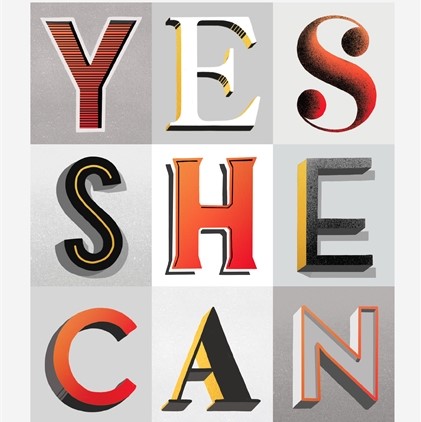 Ruth Davidson’s Yes She Can: Why Women Own The Future

If you want a book about women who do things, Ruth Davidson’s Yes, She Can: Why Women Own The Future, is the book for you.

Yes, the leader of the Scottish Conservatives has written a book, but it is not a Conservative manifesto. Described by Davidson herself as a “champion for the pace of change,” it features seventeen highly successful, unapologetic action women in traditionally male-dominated professions.

Some are very famous: Melinda Gates, Theresa May, Laura Kuenssberg and Katherine Grainger. Others you probably will not have heard of: Dr Seema Rao trains the Indian male Special Forces in combat and Dr Rola Hallam saves lives supporting local communities in war torn countries.

From diverse fields and backgrounds, their personal stories are deftly interwoven into stories from Davidson’s own life, and it is a credit to her journalistic skills (Davidson’s former profession) how much these women reveal. Their stories smash though our perceptions of what female success looks like.  “World-beaters are so successful they must be fed on sunshine and shit rainbows, right?” writes Davidson, adding “And yet, and yet” – a refrain used throughout the book as she shows us real, vulnerable, determined women who open up about the highs and lows of how they got to where they are, and tell us what they are doing next to change the world.

My favourite story in Yes, She Can is of the Butcher’s shop girl who planned to become a laboratory assistant after school, until her teacher told her to go to university. “I didn’t think I could,” says Professor Dame Sue Black, now one of the country’s pre-eminent forensic scientists. It makes you think of all the unfulfilled potential out there.

Black’s personal experience directly impacts her professional life: as a forensic scientist she helps police investigations into paedophile cases and she herself was abused as a child. “I think part of who I am is embedded within that,” she says.

These women do not shy away from the darkness and difficulties in their lives. It is this that makes them even stronger.

Davidson is also touchingly honest and open about the personal setbacks in her own life: two major life-changing accidents as well as her battles with mental health and self-harming at Edinburgh University. While “still frightened of going back to that place” she describes the tools that helped her and the confidence and “self-knowledge” she gained from the Scottish referendum campaign:  “I had tested myself and passed. I know myself now.”

Yes, She Can arms the reader with a plethora of pithy aphorisms born from the lived experiences of the women at the top. While success has to be “worked at and striven for,” so also do we have to realise that “how we perceive our potential is what our potential will be” and that “failure can either shine a light on your goals or inhibit you. You have to challenge it.”

It’s a call to arms from the lessons of our foremothers but also a set of reassuring memoirs that remind us that life doesn’t always go to plan and that is okay.

Davidson writes on her frustration with female quotas:

“I want to scream a massive ‘fuck you’ to a system that says we must ration and apportion seats at the decision making table because, without such dispensation, women wouldn’t be able to take those seats on their own.”

Yet the women who feature throughout Yes, She Can are changing this system by bringing women to the ‘decision-making table.’  Theresa May set up Women2Win to get more women into politics, Maria Bello set up the Systemic Change Project to tackle unconscious bias in decision-making in film and Melinda Gates is an advocate for female education and is encouraging more women into tech. Kerry Kennedy fights for women’s rights and judicial independence, Ruth Ibegbuna’s RECLAIM enables young people from deprived backgrounds to achieve their full potential and broadcaster Sandi Toksvig is asking women to add female biographies on Wikipedia, as currently only 9% of the profiles are about women.

All these women are actively enacting change through projects, through using their voice, and also by doing a job that expands our idea of what a woman’s potential can be. As Laura Kuenssberg, the first female political editor of BBC News, says: “Once I’ve done this job, there’ll be one less reason for women to say, ‘Oh, I couldn’t do it.’”

Davidson is hopeful for the future of women, yet she ends Yes, She Can with a stark warning:

“If there is donor or activist fatigue, or a generation takes for granted that things will naturally get better without anyone having to advocate it, there may be a slip.”

She passes the buck on to us to continue the good work that has been done, in the hope that in her lifetime her book “will become an obsolete curio… to be puzzled over why it was needed to be written at all.”

Considering the stories of online vitriol and rape threats levelled at women to silence them on online platforms, the lack of women in major fields such as Finance, Politics and Technology, the huge gender pay gap that persists, and the story of Sandi Toksvig, who was forced into hiding after receiving death threats for having children in a same sex relationship, there is clearly a long way to go. But if these women show us anything, it’s that if we want to change the world, we need to just ‘get on with it’ and start ‘doing.’

The Best A Man Can Get

The Story of History
[yuzo_related]