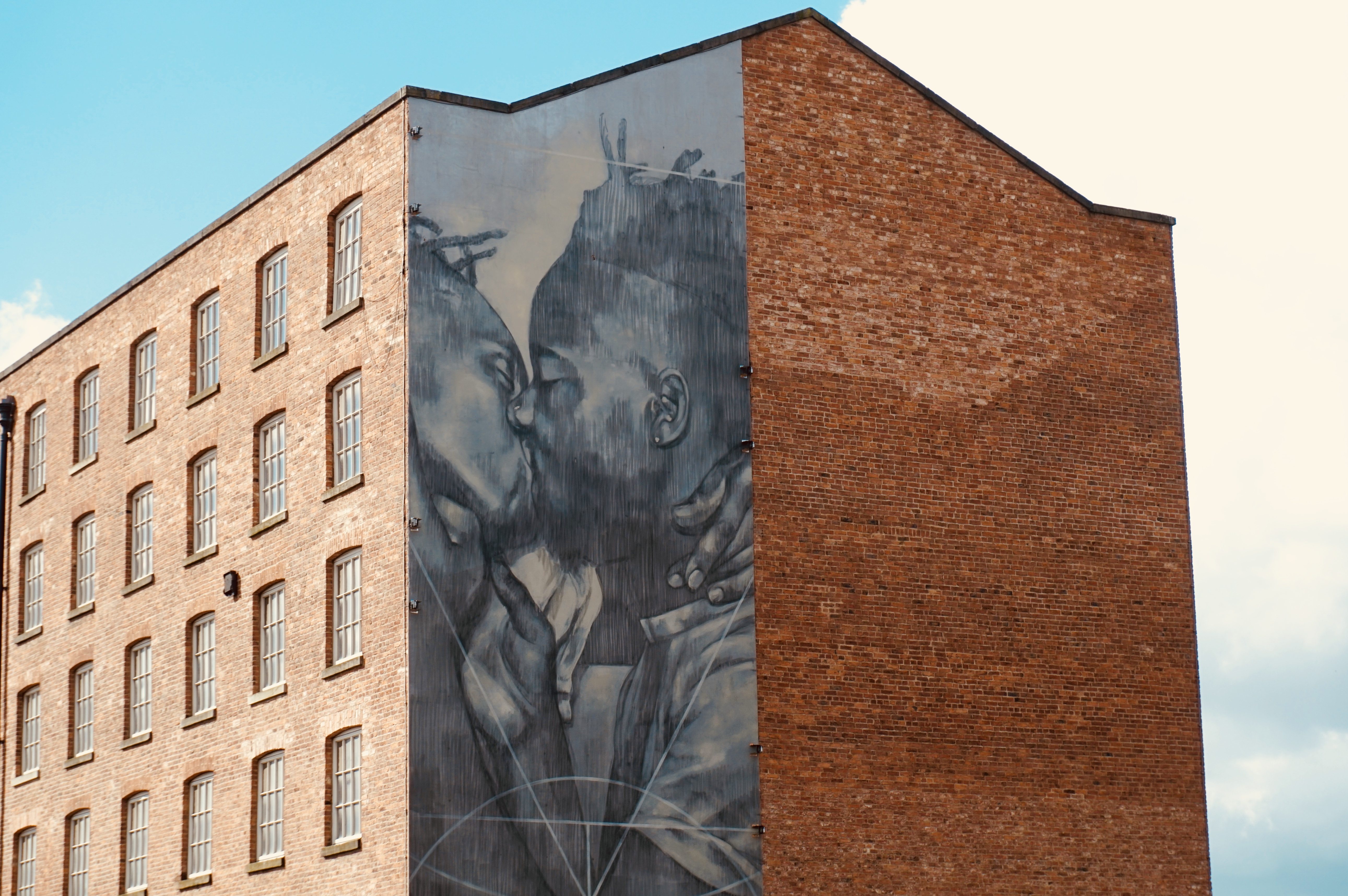 Manchester is an energetic and diverse city; rich with character, architecturally, musically and artistically. And there is one prominent feature injecting vibrancy, inspiration and creativity across the city walls: graffiti and street art.

Manchester itself has become a canvas for artists both locally and globally, imprinting their commentary on social and political issues through artwork, and projecting them into the consciousness of the public. Underdeveloped areas have been transformed by powerful imagery: giant murals adorn the once industrial buildings, showcasing the talent of those involved.

Manchester has had a long history of graffiti sprawled across its city streets, but its significance began in the 1980s – fuelled by economic unrest in the area, and influenced by the New York graffiti scene. Graffiti writers wanting notoriety would spray their names on every surface available, and gang tags were, and still are, a regular sight within the city. The diversity of work was impressive, however, the vast majority was illegal at the time and viewed upon as vandalistic acts. Subsequently, this lead to a sharp rise in arrest and convictions. However, the threat of imprisonments did not deter the movement. The introduction of council-run legal walls began, and graffiti culture continued to develop and integrate its way into the contemporary landscape that we see today.

This is most apparent in Manchester’s Northern Quarter ; this distinctive neighbourhood offers artisan coffee houses, live music venues and independent record shops and it is awash with graffiti and street art which brings a unique aesthetic and identity to the area. Many of the establishments cover their exteriors with artwork. The area of Ancotes, located adjacent to the Northern Quarter, is also a popular area where street art, and thought-provoking imagery can be seen in abundance.

In recent years, artists have achieved international notoriety; exhibitions, festivals and  large-scale commissions have become more frequent. Noteworthy charity Out House MCR developed an outdoor project in 2010 where, four times a year, the charity aims to rework Stevenson Square in collaboration with new artists. They also use the Tib Street substation, and rework it on a monthly basis. One design on that particular substation which caused some controversy was the Banksy-inspired piece by artist John D’oh. Many people were convinced it was an original Banksy – it was in fact a critique of the Sincura group who had plans to expose Banksy’s identity.

One of the most recognisable charities involved in the street art movement is the Cities of Hope Festival. In May 2016, they brought nine of the world’s best artists to Manchester with the aim to tackle social injustice via the use of powerful and thought-provoking murals, Here are some of the outstanding pieces:

Faith 47’s mural pays homage to the rights of the LBGTQ community – this piece is illuminated at night, with a symbolic light installation of an LBGTQ peace sign.  Faith47 is an acclaimed political artist from Cape Town south Africa. Her work reflects humanitarian and female rights issues – her mural displays an intimate kiss between a couple. It is part of her series 7.83 Hz  “Relationships rise and fall; societies blossom and crumble”. This monochrome piece appears to be a drawing or  a sketch rather that a painting, with its fine vertical brush strokes.

Distinguished artist from Miami, Axel Void, painted the piece Sisyphus: the image of a girl having a smile forced upon her face. Void draws upon greek mythology to create his concept and his work has had a huge impact in the street art community. He has used his fine art skills to show hyperrealistic and often disturbing imagery to create his narrative. Sisyphus was a king punished by Zeus, forced to roll a boulder up a hill and watch it roll back down, repeatedly for eternity. Axel’s girl has the word Sisyphus written across her. Although open to interpretation, I feel this examines the relationship between our inner self, and the self we want to portray, often masking our true identities.

Germany ’s most prominent Urban artist, Case Maclaim, addresses disability issues in his Cities of Hope Mural; and he’s done so using his distinctive photorealistic style. His mural depicts a man who is holding on to a railing needing rest. The image gives a great sense of strength, showing someone who is willing to hold on and not give up in the face of despair. His precision and detail is outstanding, you can clearly see Case has honed his craft as a photorealist artist.

Renowned local street artist Phlegm, based in Sheffield UK, has earned global notoriety creating large scale murals across the world. His elaborately detailed monochrome aesthetic is instantly recognisable. His work as a cartoonist and illustrator is apparent in his art, and many of the characters in his murals originate from his self-published comics. Phlegm’s style often depicts dystopian worlds with peculiar creatures, which are both mesmerising and unnerving. For the Cities of Hope festival, he created an entire city encapsulated in a bottle, focussing his work around the concept of sustainability. A city becoming self sufficient in order to preserve itself is an optimistic and positive outlook, however the fact that the city has somehow become isolated and trapped in its own making is very discouraging. This juxtaposition of ideas and emotions is a constant throughout Phlegm’s artwork.

Manchester’s graffiti and street art scene has no signs of slowing down, each day new work is being created, you only have to walk down the street to find artists with spray cans at the ready, preparing to capture the imagination of passers-by. There is no doubt that graffiti culture has made a massive imprint on the city of Manchester, both politically and artistically. The medium is continuously evolving, and I am excited to see where it will go next.