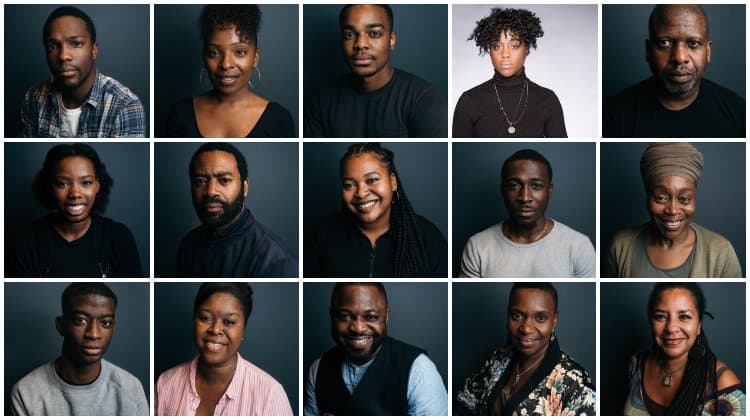 ear for an eye

Are you sitting uncomfortably? Good.

debbie tucker green is back at the Royal Court with ear for an eye, a searing collection of glimpses into Black British and African American experience today. The play shifts between snapshots of moments, as the audience eavesdrops on the conversations of ordinary families. At the centre of their dialogue: PROTEST, and the gap in discourse between parents and their children when it comes to progress and change. It’s about the steady approach of the older generations vs the immediacy of the young. It’s about society’s complacency in failing to acknowledge that whiteness still presides in people’s everyday lives.

Here’s a bit about the average white person’s experience in the UK. NONE OF THIS SHOULD SURPRISE YOU. White kids are least likely to be permanently excluded from school – and significantly more likely to attend a Russell Group University than their Black peers. White graduates and school leavers with A-levels earn notably more. Unemployment rates for white people are lower – most people in higher paid, senior positions in the workplace are white. White people are least likely to live in poverty and three times less likely to be arrested. White women have a mortality rate four times lower than Black African women. This is just the obvious stuff – this doesn’t even scratch the surface of the effects of white privilege and everyday racism.

ear for an eye gives a poetic space for fundamental issues. Because how many white people spend any significant portion of their time wondering how to carry themselves, so as not to attract unwarranted attention from the police? How many white people worry that their right to protest might get themselves killed? The play holds a big, difficult mirror up to the past and shows how its echoes reverberate today. Unsurprisingly, the writing is impeccable and the dialogue starkly interchanges from speaker to speaker, each fragment building a reflection of life. Each characters’ complexities speak volumes – nothing is fragmented.  Stand out performances for me were from Tosin Cole, Lashana Lynch, Jamal Ajala and Kayla Meikle.

The play’s second part sits its audience through a gruelling session of academic mansplaining from professor to student, reminding us that words are everything – but that words are all too often whitewashed. What constitutes a lone wolf and what constitutes a terrorist? You can almost always be sure that race has something to do with it. Why does our press coin terms like ‘indiscriminate killing’ when hate crimes always discriminate? Words are power but power corrupts. Anyone who claims that the political and personal are mutually exclusive lives a life so immersed in privilege, far beyond the consequence of political change.

This is a play about letting people speak for themselves. White people are uncomfortable with the subject of race and ear for an eye reminds its audience that society entitles white people to feel rage, to be emboldened by indignation. Society does not respond in the same way to all. So when the play opens up the ‘white narrative’ and it’s the narrative of segregation and slavery, shackles and chains, yes – it’s very uncomfortable, and it should be.